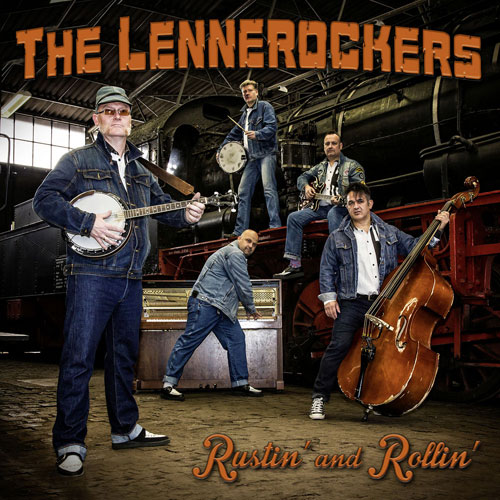 In 2014 The Lennerockers will be celebrating the band’s 30 year anniversary; and it’s certainly been an eventful 3 decades…. In 20 countries, the band played almost 2,500 concert performances, including one in a Boeing 757-300 at an altitude of 11948.16m, and one 502m underground (Kali + Salzberg work Merkers). Injuries on stage are an almost everyday occurrence. Countless times, one of the musicians has fallen from the piano, the bassist has broken down with his instrument or the drummer has fallen backwards off the stage.

The Lennerockers have sold more than 50,000 copies of their 14 released albums, and now their 15th Album, “Rustin’ and Rollin'” is being released just in time for their anniversary.

The album title is tailored to the band because if a band tours for 30 years without a break, that leaves its mark. But let’s be honest. Which old timer is cooler? The one standing polished in a museum or the one with a little rust, still doing its duties in the street?

In a musical sense, The Lennerockers are not rusting just yet. The album “Rustin’ and Rollin'” includes 14 new songs, nine of which were written by the band members themselves, including the first single “Try Hard, Dig Deep, Break Through”. There are two cover songs, “Will The Circle Be Unbroken” and “Crazy Fucking Rocker”, which are well known to those who have visited the band’s concerts and have caused jubilation when performed.

One does not need to consult a crystal ball to know that the album “Rustin and Rollin'” will be a huge success for the band, as The Lennerockers have managed to retain their unique style, a mix of Rock ‘n’ Roll, Rockabilly and Country Music. A recipe which has been bringing joy to fans around the world for 30 years now.