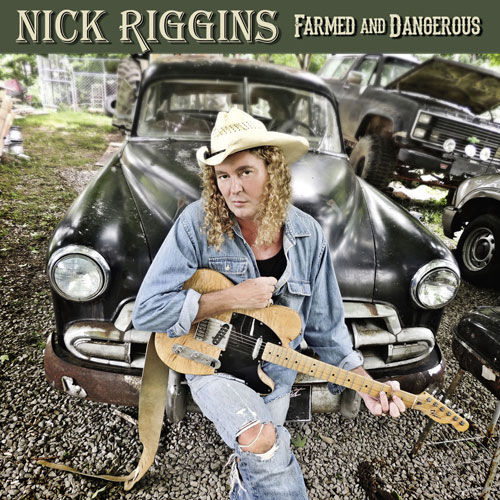 “Farmed and Dangerous” is the debut-album of country-rocker Nick Riggins. He has co-written the 10 songs with Jay Brunswick, Dave Gibson, Greg Crowe, and John Swantner. The album was produced by Johnny Garcia who has been playing guitar with Trisha Yearwood since 1991 and is also her music director. Add Garth Brooks to his resume in 2000 and he’s been on some of the biggest stages in Country Music for the last 25 plus years.

The album includes the music of CMT’s “Tobacco Wars” series. On the series, Nick Riggins showcases his skill as a dark fire tobacco farmer, growing and curing tobacco specifically farmed for cigars. He also shares a lifetime of shtick with his sidekick Scott Gainous.

The first single and title song is a country rocker. Nick Riggins wanted people to know that in Kentucky “we grow the food on your table and yield a lot of fun and muscle while doin’ it. We’re not only armed and dangerous, we’re “Farmed and Dangerous.”

With the album Nick has proven to be a modern day renaissance man, a consummate performer who is unique and one-of-a-kind. His voice is fresh and captivating and his stage performance is nothing less than compelling. He sings the kind of party-hearty country that “drives the industry train.” Nick Riggins is the “real deal”, a true country talent from the rural south.