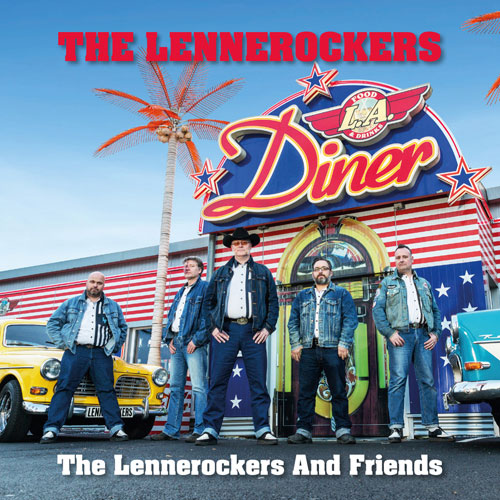 When The Lennerockers brought out their first “And Friends” album in 1992, the band had long been one of the best and most successful figureheads of the German rock ‘n’ roll and Country scene. It was already the fourth album of the band from Hagen-Hohenlimburg, which had been founded in 1984 – and it was their best to date. The collection included gripping versions of established rock ‘n’ roll and Country numbers, songs like “Hot Dog” written by Buck Owens, “Don’t Leave Me Now” by Leiber and Stoller and Bill Monroe’s fantastic “Rocky Road Blues”. Three years later The Lennerockers followed it up with “And Friends, Volume 2”, a seamless development on the success of the first collection. Both albums achieved absolute cult status on the rock ‘n’ roll and Country scene. After all the regular editions were sold out, many fans were willing to shell out considerable sums to get hold of these coveted collector’s objects.

And yet the outstandingly accomplished quintet could not make up its mind to re-press the albums. The band continued creative, and recorded further successful albums and DVDs. And they were busy. By now The Lennerockers have chalked up something like 2500 live gigs, as well as selling more than 60,000 sound recordings.

This impressive figure may now be about to increase exponentially – for the band led by singer Michael “Ele” Koch and guitarist Frank “Butti” Butgereit has finally bowed to the wishes of its fans and is presenting “And Friends” together with “And Friends, Volume 2” in a remastered double-CD version – with ten dazzling bonus tracks included.

Looking back on it now, it still seems an astonishing line-up – the illustrious group of “Friends” who banded together with the North German boys of the Fifties in the studio. This was the international crème de la crème of Roots Rockabilly. There were musical rebels like Sandy Ford from Scotland, whose band The Flying Saucers had already written a few chapters of musical history in his home country. Then there was British-born Freddie “Fingers” Lee, a real rock ‘n’ roll legend by the time of his death in 2014. With him they made fresh recordings not only of the “Rocky Road Blues” mentioned earlier, but also of his own fantastic composition “Chills”. Not many years after working with The Lennerockers, the American Rockabilly icon Johnny Carroll and Hillbilly, Rockabilly and Gospel queen Rose Maddox from Alabama also took their final bow. The recordings they made with The Lennerockers form part of their most notable legacy. Just take the utterly spirited and wholly authentic version of the classic “Who Do You Love”, which shows Carroll at the top of his game, as is equally the case with his interpretation of Allman Brothers’ cult song “Midnight Rider”.

It was a different kind of sound, as you would expect, that emerged from The Lennerockers’ sessions with Rose Maddox. The grande dame of American Roots music was pushing 70 at the time, but her voice was still in superb shape, as she showed in a fantastic “Gospel Medley”, with Christian Schimanski, another “friend”, accompanying on the pedal steel guitar. Other members of the Ruhr-based Rockabilly coterie were no less prestigious as performers. Take for example Johnny And The Roccos, the piano virtuoso Andy Lee from America, Orville Nash (long since a resident of Europe) and the Doo Wop group from Bielefeld, The Crystalairs. An instrumental highlight is Chris Kramer on the Blues harp, who plays his own composition “The Quarter”.

For fans of the Lennerockers, as well as those who love the earthy Rockabilly Country and rock ‘n’ roll sound, the album offers all you could possibly ask for: 28 original songs plus 10 bonus tracks – as well as the opportunity of hearing once again so many forgotten legends. That shows greatness, and respect. And paves the way for the Lennerockers themselves to achieve legendary status.